Zodiac Pop! has been out worldwide for a month now and has even been featured on Google Play. Since then, we’ve been gathering all the feedback and comments you guys gave, and addressed them in the game’s first update! 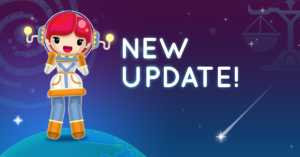 In this update: A new zone with more levels, tweaks to make the store and boosts easier to use, and a smoother transition to unlocking new zones!

New levels – You’ve been asking for them, and now here they are! We’ve added a new zone: Leo to the game, with new levels of new bubble popping challenges.

More bubble popping levels await you at the Leo Zone!

Difficulty adjustments – We’ve heard your comments about a few levels being a tad more difficult than others, so we’ve gone back and tweaked them to be more forgiving.

– Performance improvements and optimization for smoother game play – we’ve polished what we can based on your feedback. Thanks, guys!

Again, we are very grateful to everyone who has played the game and gave us their feedback. We’ve got more levels to build (we know how fast you guys finish them! :D) and more bugs to squish. With your help, we’ll keep making Zodiac Pop! even better!