Luna: We wanted to tell the story of Run Run Super V without interrupting the gameplay. The basic premise (an evil villain out to conquer the world, with your squad of sentai heroes set to stop him) could be told in a few panels with no text:

Chester: I took the liberty of merging some panels together and inserting new panels in between, to show the clearest flow of the story in limited screen space. We’re also using a 4:3 aspect ratio so that the comics display properly for our future iPad version.

Chester: After simplifying the panels, I drew thumbnail sketches on low resolution, using Adobe Photoshop, for quick and light communication of story flow. Once Luna approved those, I proceeded to the pencils stage (I say ‘pencil’, but what I really mean is drawing a clean digital sketch on high resolution). I paid close attention to character design, expressions, proportions, and cartoony perspective, drawing the page in clear detail so that it would be easy to digitally ink. 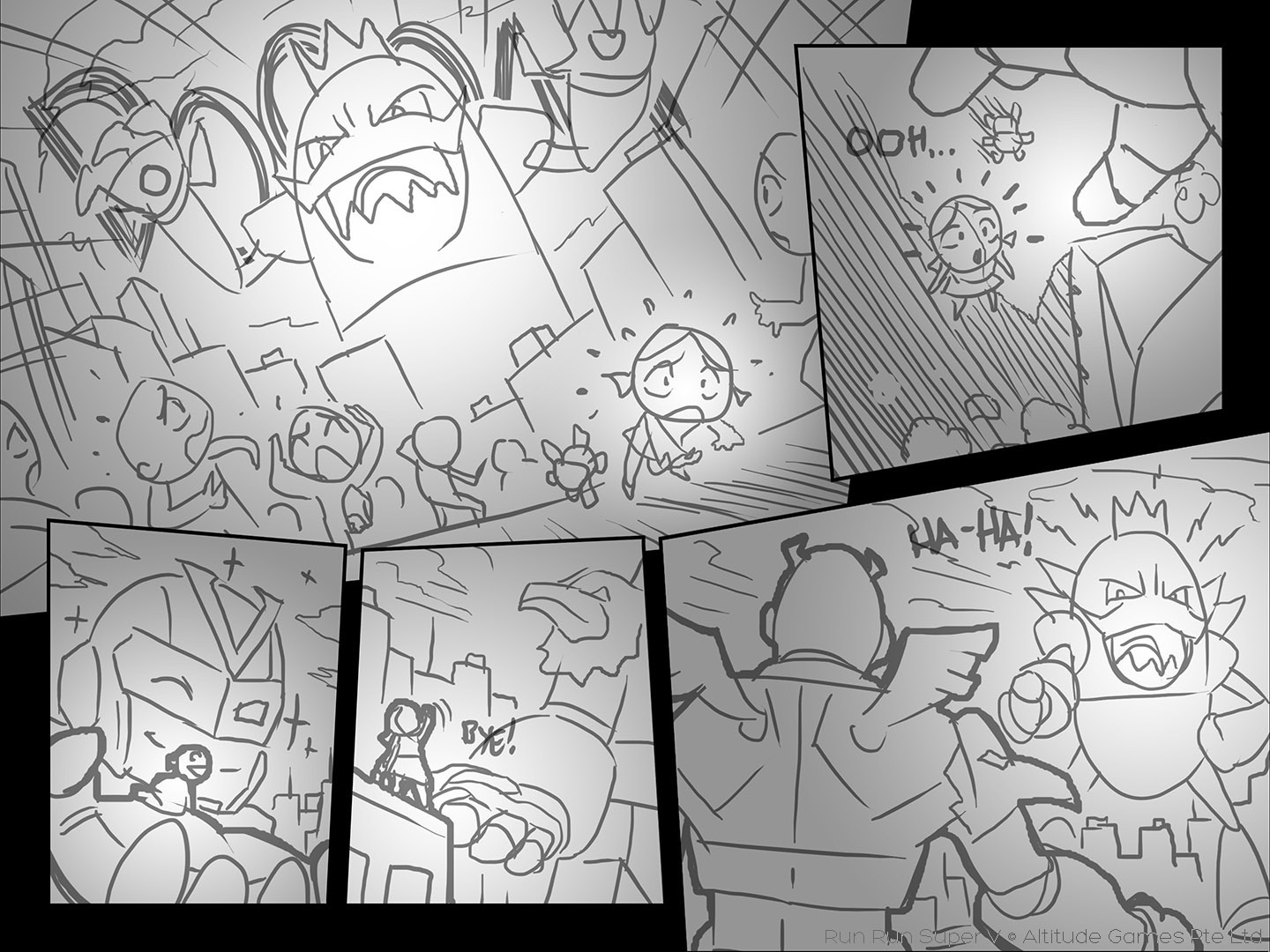 It starts with a simple sketch… 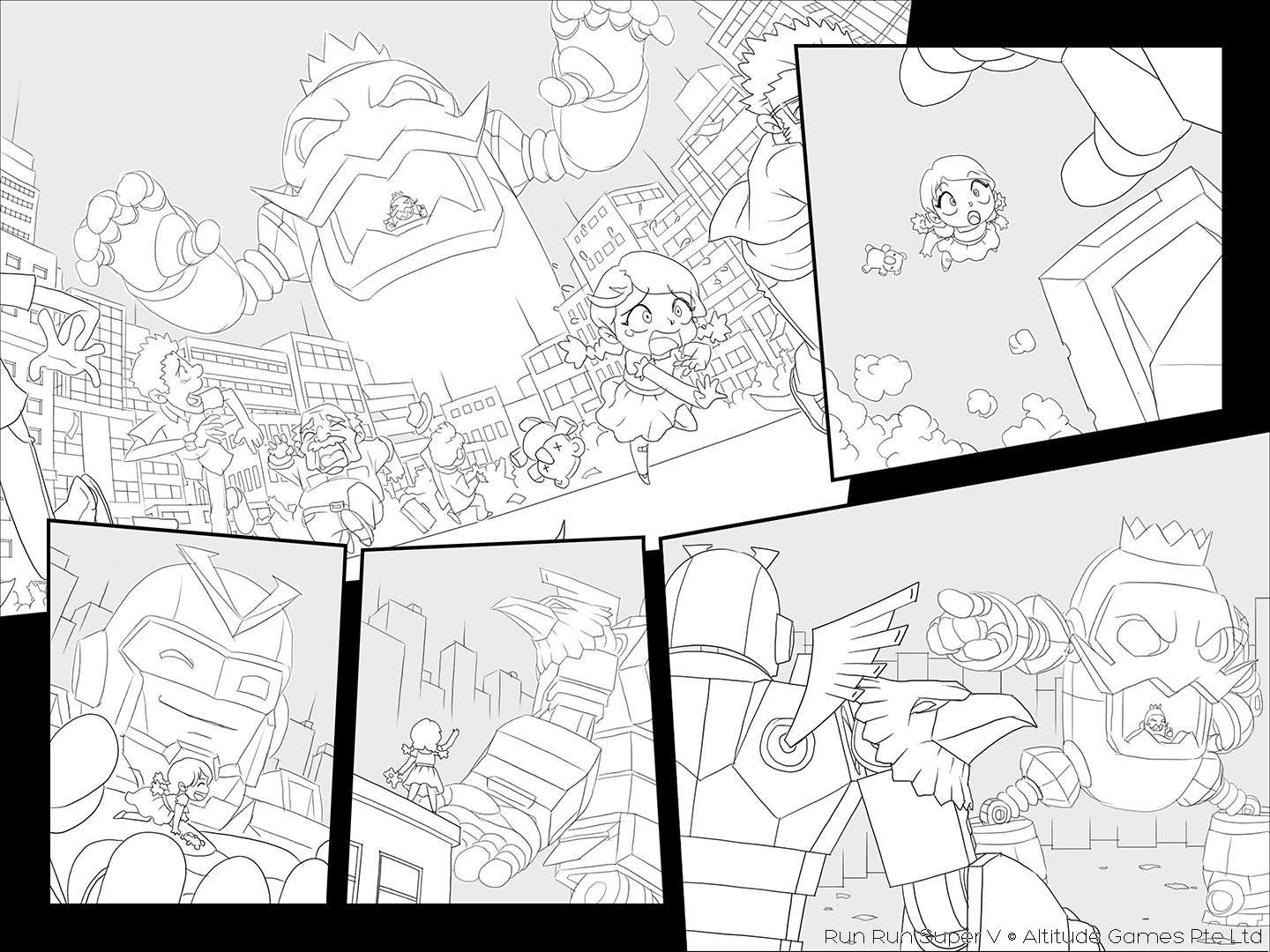 ..then Chester adds little details here and there.

Chester: Digital inking was done by Robot With A Smile’s Shelly Soneja and Marvin del Mundo.They cleaned up the lines to give the comics a slick cartoony feel, and added thickness on the lines to create a sense of depth, even on black and white. 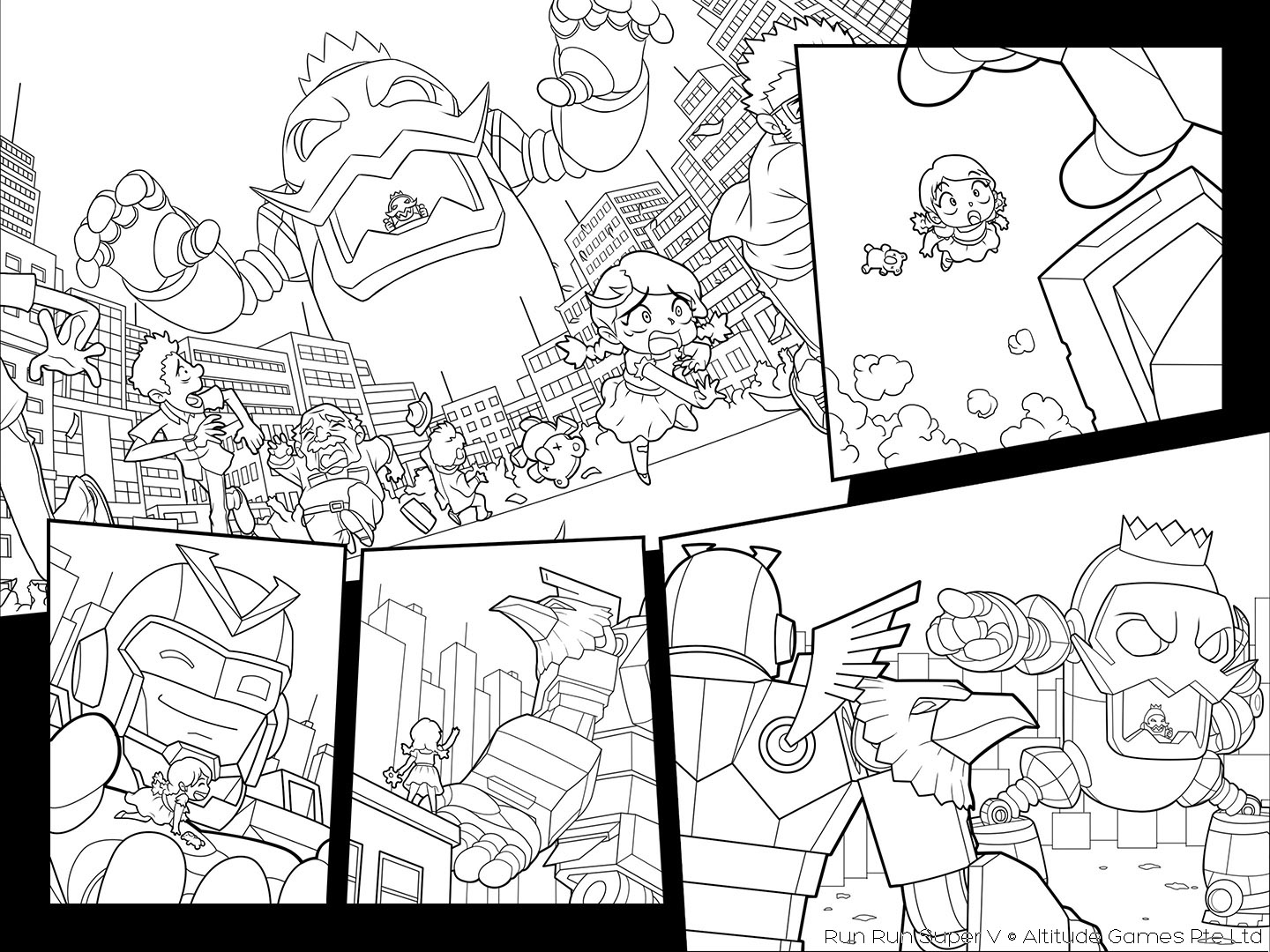 Fantastic work by Shelly and Marvin. They are actual robots that smile while they work such magic.

Chester: The final step was coloring the inks. The whole look and feel of RRSV is cartoony, so we opted for a cartoon-shaded coloring style for the comics. Once the basic cartoon-shading was colored in, it was time to put enhancements on each panel. Where necessary, I added speed lines, lettered the sound effects, separated foreground elements from the background, and color grading. These enhancements were meant to give each panel the visual impact they needed in the context of the story. 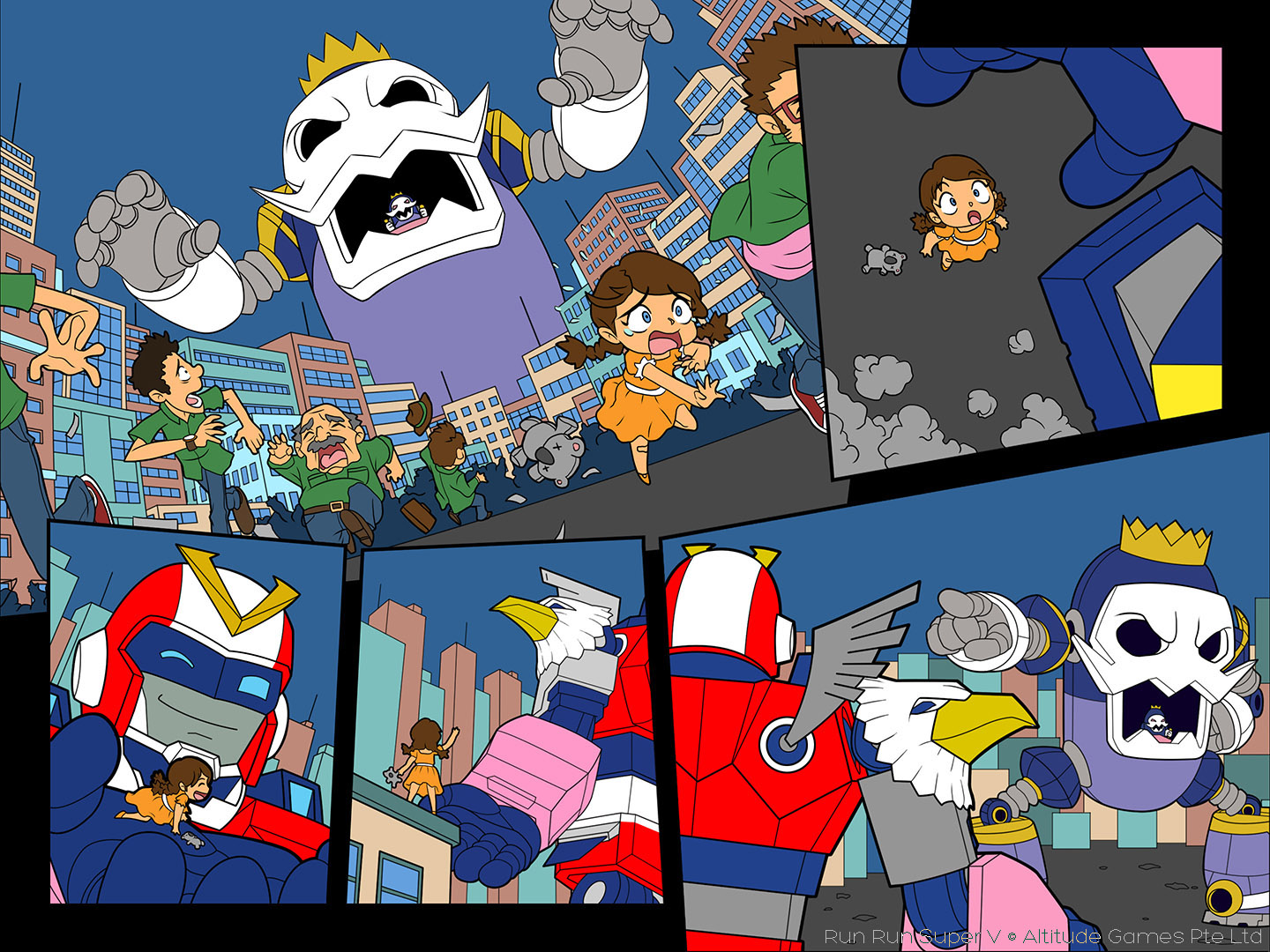 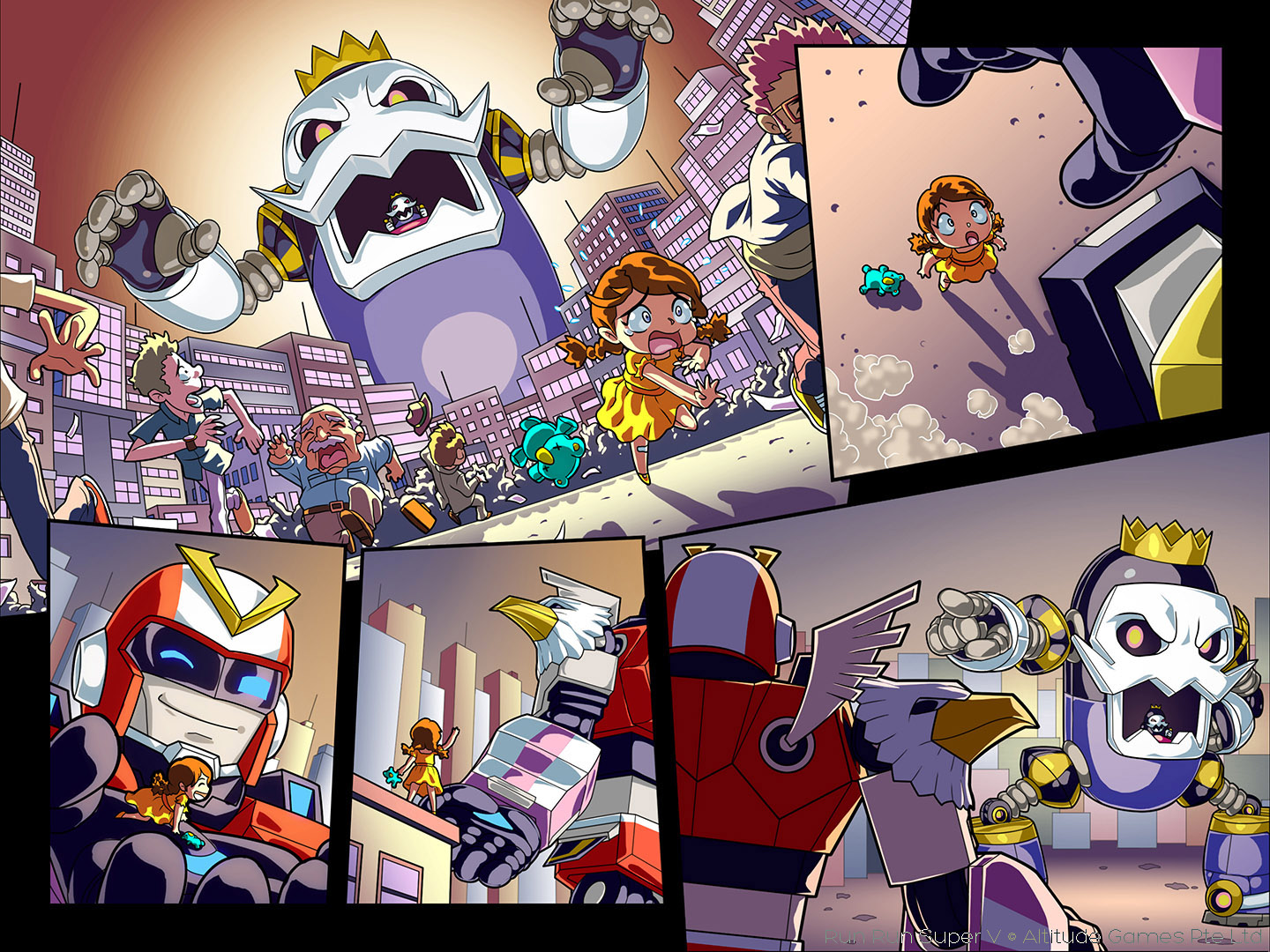 …then add more emphasis on lights and shadows… 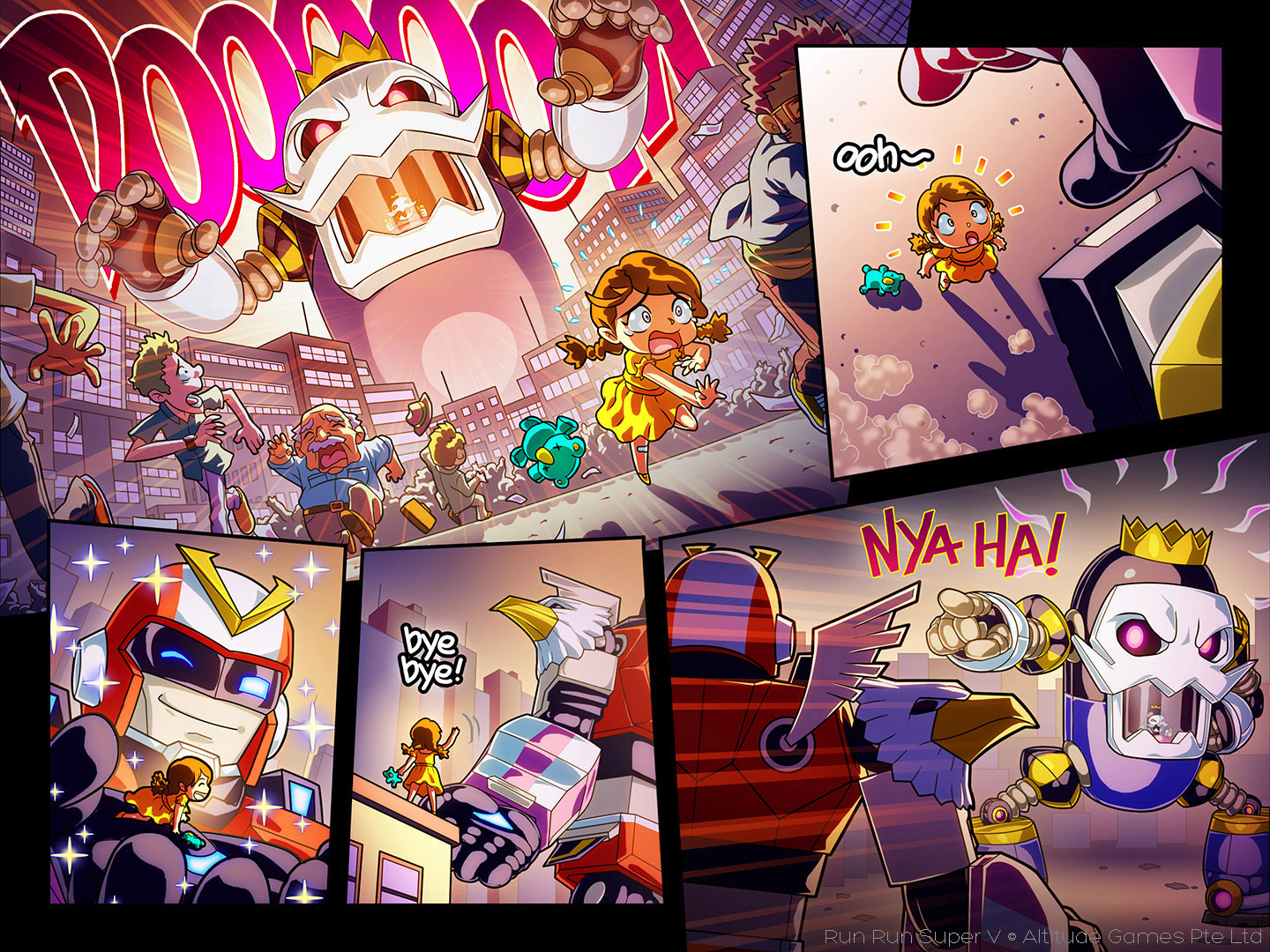 …then polish up all the details. So shiiiiiiny~~

Luna: We hope you like the comics so far! We’re planning for more screens in the future, as well as a way to view them again in the game. Thanks for reading!

—
If you haven’t already, you can download Run Run Super V alpha at the Philippine Google play store:

Let us know what you think and if you like the game, please rate us!