The Manila Game Jam 2015 has ended, and it was a lot of fun. Several of our co-workers here at Altitude also joined the game jam, and in this blog post, we highlight their thoughts and experiences as they went through the process of creating their games this year. 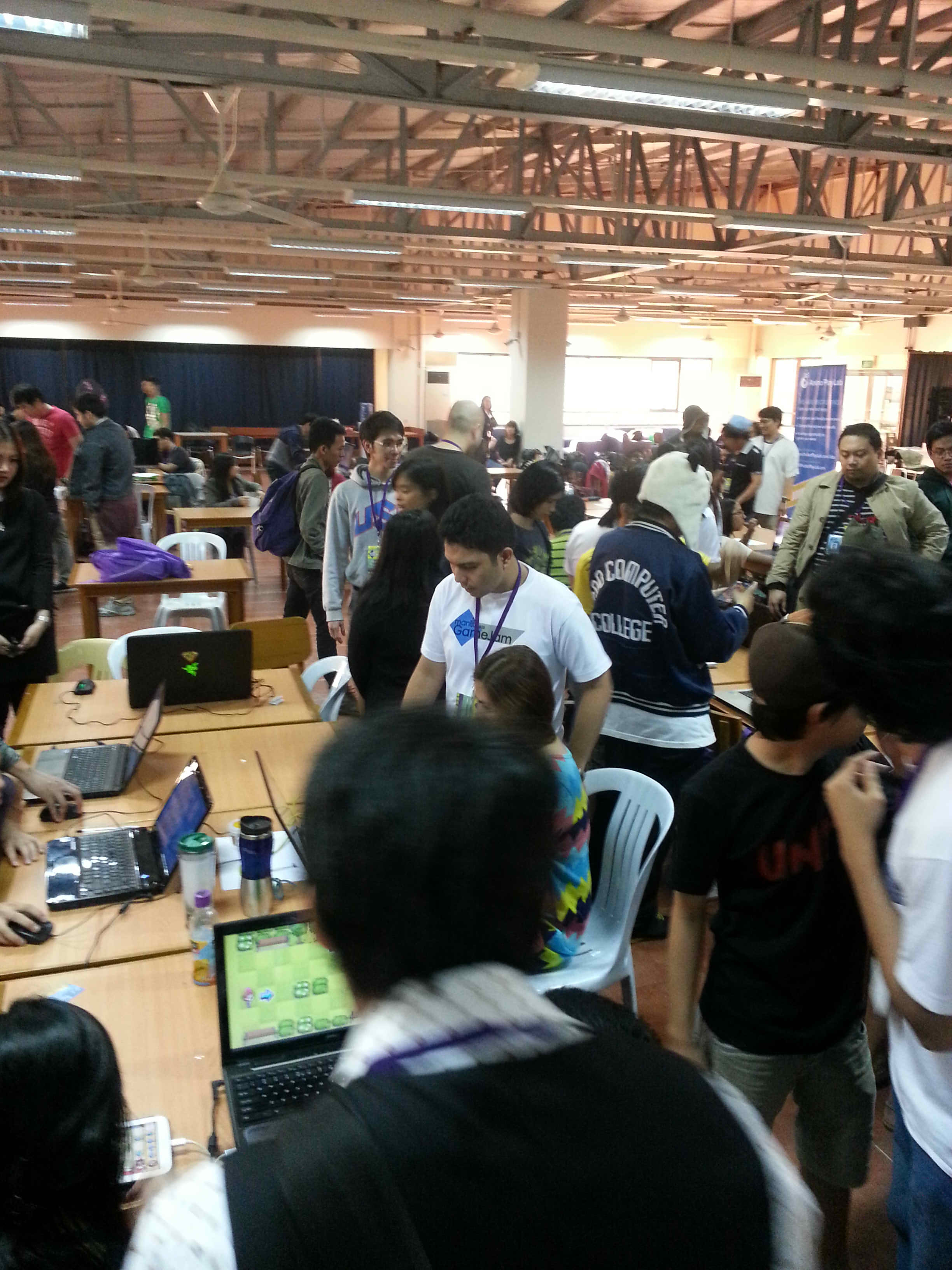 So without further ado, Joniel, Aileen, Erwin, and Benjo takes us through their own game jam journey this year.

This is my second game jam 🙂 My first game jam was just last year.

I slept 4 hours the first night, and 2 hours the second night. I didn’t feel tired though, since I loved what we were doing.

Our game is called “Fate Marks the Spot.” It’s a top-down puzzle, where you act as fate to bring a couple together. You can download our game here. 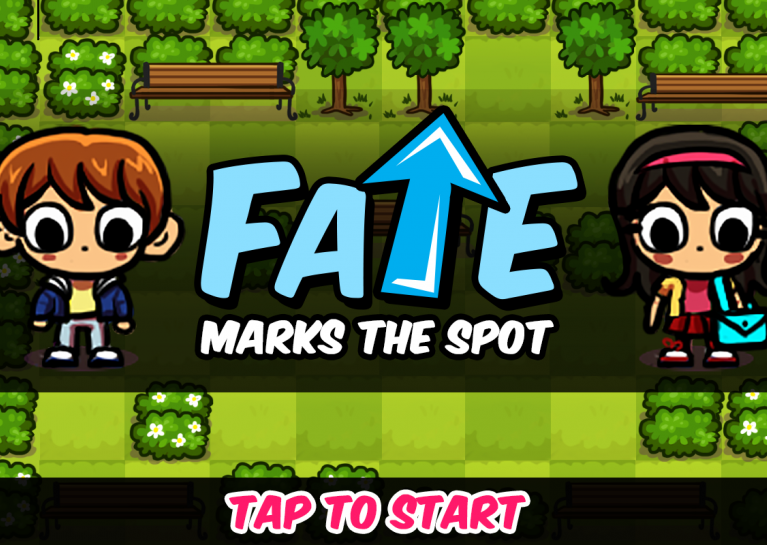 My favorite moment would be the last minute countdown before the game jam ends, and how our team did a photo-finish. We all shouted, “Good job, team!” to one another and did a round of high fives.

But my favorite part of the event is going around the venue and trying out everyone’s game. Compared to last year’s venue, this year’s venue was super spacious so there was enough space, tables and chairs for everyone. (Thanks to Ateneo for allowing us to hold the Game Jam there this year!!)

Yes, we did 🙂 We had originally planned a tutorial + 2 more levels, but we cut the final level out. The group agreed that we had to cut the scope short when we realized that we may not meet the deadline. 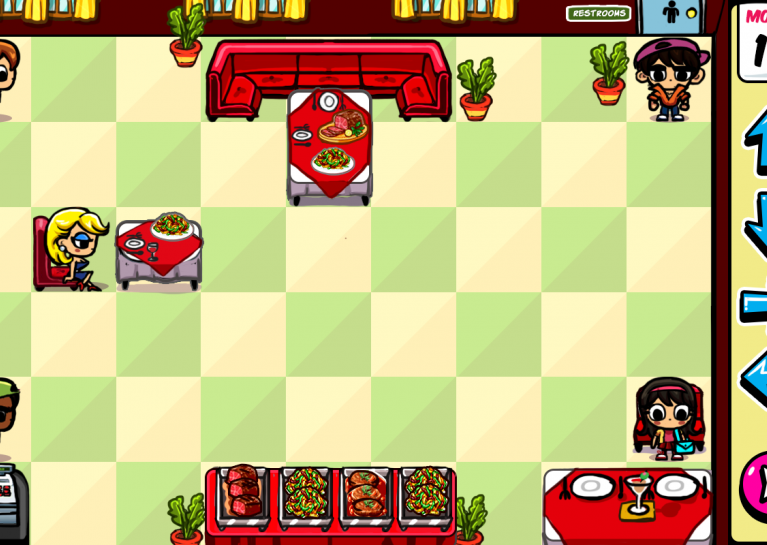 The basic goal of the game was to not be forever alone.

1. Communicate with your teammates.

You’re just given just 48 hours to make a game, so planning and preparing your schedule is very important. If you have a question, ask it right away. If you have a concern, voice it out. It will help everyone know how each aspect of the game is going.

If you want a 3D game but only have a 2D artist in a team, then it’s not going to happen. 🙂 Plan around your team’s strengths and what they can do. If your team only has 1 programmer, ask him or her if it’s possible given the time. If he or she isn’t confident, then either compromise or think of another workaround.

Game jam isn’t a contest. The heart of game jam is how it brings together people from all around the world to make games. It’s about having fun, so don’t let stress get to you. Enjoy the experience and learn from others.

I also attempted to join a few Ludum Dare’s, but I’ve never completed any because of unfortunate circumstances. T_T

I slept for around 4 hours on the first night, then 3 hours on the second. My game jam partner and I were more chill this year, but we seem to had gotten more stuff done this year. unity skillz+10! 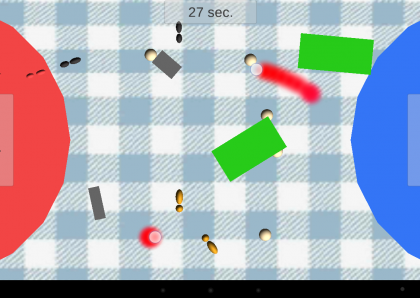 Ant behavior simulated in code. What will they think of next?

The game is a multi-player game that can be played on one device (preferably a tablet or a phablet). The game spawns ants that move straight, unless obstructed. You create “hotspots” on the board by swiping, causing temperature to rise wherever you swipe. The ants avoid these “hotspots”.

The object of the game is to manipulate these neutral ants to get food (spawned randomly throughout the map), and then carry the into your “colony”, which is on the opposite side of you (kinda like football, or basketball).

The mechanic turned out to be pretty interesting (and the ant AI is something we are proud of), but the game turned out to be crap, but we like to think that we picked up some nuggets of game design wisdom that we can apply to our future games. 😀

I really liked the venue. Being isolated from the real world (because of the venue itself and the security constraints) was something that helped us focus, I think.

This sounds kind of narcissistic but another highlight was realizing how much we accomplished with significantly less time and manpower. It felt like I wasn’t wasting my time pursuing game dev and software engineering as a craft/career because my skills are actually improving. 😀

Yup! My game jam partner (who I have worked with many times before) and I worked faster and more efficiently than ever. I think we wrote just as much code and designed more stuff than last year’s game jam at ¾ the time and 1/3 the man-power.

I like to think that our game dev skillz are levelling up, since we’re both pursuing careers in game development. 😀

Been joining game jams since 2013, from Global Game Jam 2013 to 2015. Also joined in a few Ludum Dare’s in between for good measure. If you count a game jam between friends (with the prize being a game from your Steam Wishlist), then that one too I guess. 🙂

Same as the 2 previous years, about 4. That 4 is the straight one when I pass out in the afternoon for staying up all throughout the night (and watching everyone else take all the sofas), with some intermittent power naps in between usually accompanied with my keyboard kissing my face. Fun times.

Okay, so like and unlike the previous GGJ’s, our team finished an unfinished mess. Best one by far that I ever worked on in GGJ was our 2nd, as it was the most finished unfinished product I ever had a hand in. This time however, due to some problems, we didn’t manage to finish much other than a basic prototype. With that said however, let me talk about what is SHOULD have been. 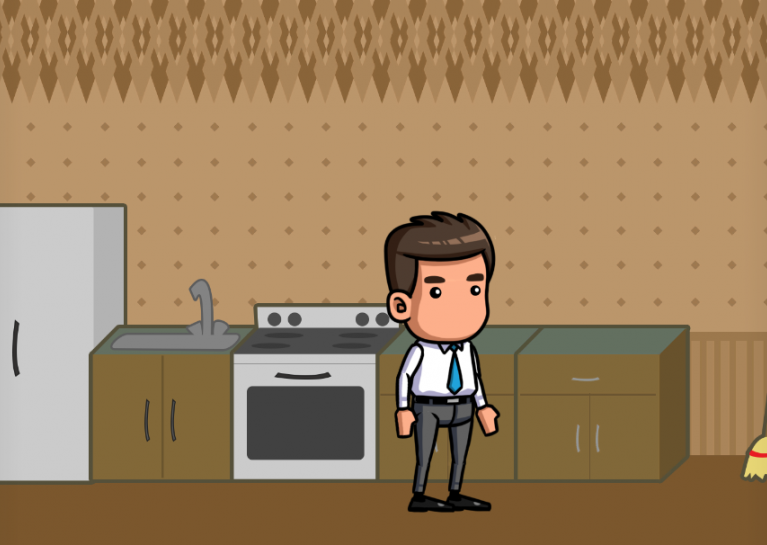 ‘The Angry Wife’ would have been a side-scrolling point ‘n’ click puzzle game. The premise: You as a regular salaryman come home from work and find your wife angry at you about something, and you must figure out what it is and do something about it. The mechanics were to be a point ‘n’ click puzzle game using only the clues strewn about your home to solve the puzzle of the reasoning behind your wife’s temperament. There would have been multiple scenarios and objectives (even a Baby!), and different house configurations would hint at different solutions, with branching solutions that also have a rating in the end, meaning you could solve it, but you could either solve it well or vice versa.

Whether that was a good idea or not remains to be seen, as we didn’t get a full enough build to properly feel out if it would have been fun or not. But hey, it’s about the ‘Experience’, and boy did we get a lot out of that one.

Everything else that are my favorite parts (the people and the unbridled chaos) are still the same from past GGJ’s, but the stand out of this year was the venue. I think it boils down more to personal preference, but it was waaaay more accessible for me due to how much closer it was to where I live (Katipunan vs. Makati, wooo). Otherwise, the food was good (catered instead of mass Jollibee/KFC ordering) and the area was wide and open. Also felt much safer, due to the upped security staff (that’s Ateneo for you).

Reiterating, no. But, again reiterating, it’s still waaaaay more about the experience you get. Nothing beats the best (or the worst) out of you like the immense pressure and atmosphere of a game jam. 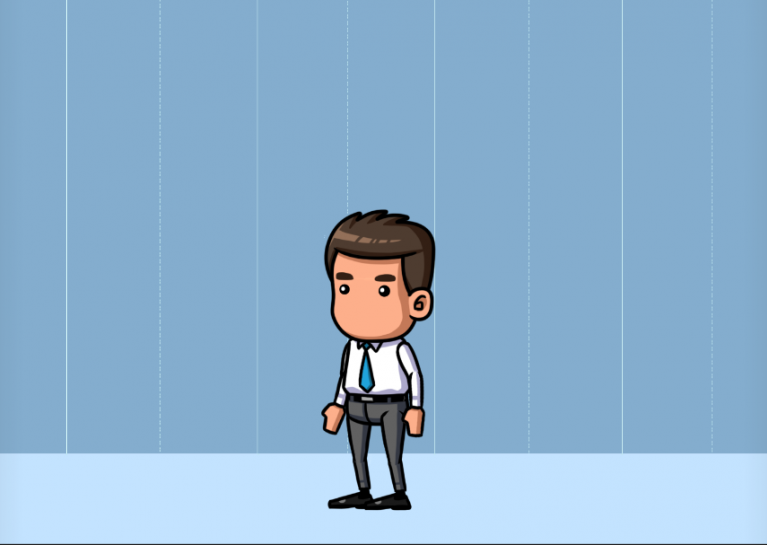 Life is a lesson. You learn it when you’re through.

8 hours a night! It’s probably my proudest achievement this year. 😛

I got hit with stomach flu smack dab into the jam, so I couldn’t skimp on sleep or rest — I went home each night of the jam since I lived pretty near the venue.

In line with this, I personally advise against skipping sleep. Getting enough rest is important to keep yourself motivated, creative, and happy, and those are important in making sure you can make the game you want within the limited time.

Our game is supposed to be about figuring out how to keep your wife from getting angry every time you go home from work. The game we submitted is about clicking three trash cans to fill them with trash, which somehow makes your wife extremely happy.

As one could probably discern, we weren’t able to put in all the features we hoped to make.
What’s your favorite part of this years’ jam?

The people and the games they made! Since I’ve been attending the GGJ consistently, I’ve seen how the people attending the event have gotten better at the craft. On the site I attended (in Ateneo), the quality of the submitted games amazed me. Most of the people were no longer fumbling around on what to do, and many newbies had a lot more knowledge than we had years ago. Seeing old and new faces alike excited me, and, really, seeing a hundred or so people in a big venue making games is just darn awesome. 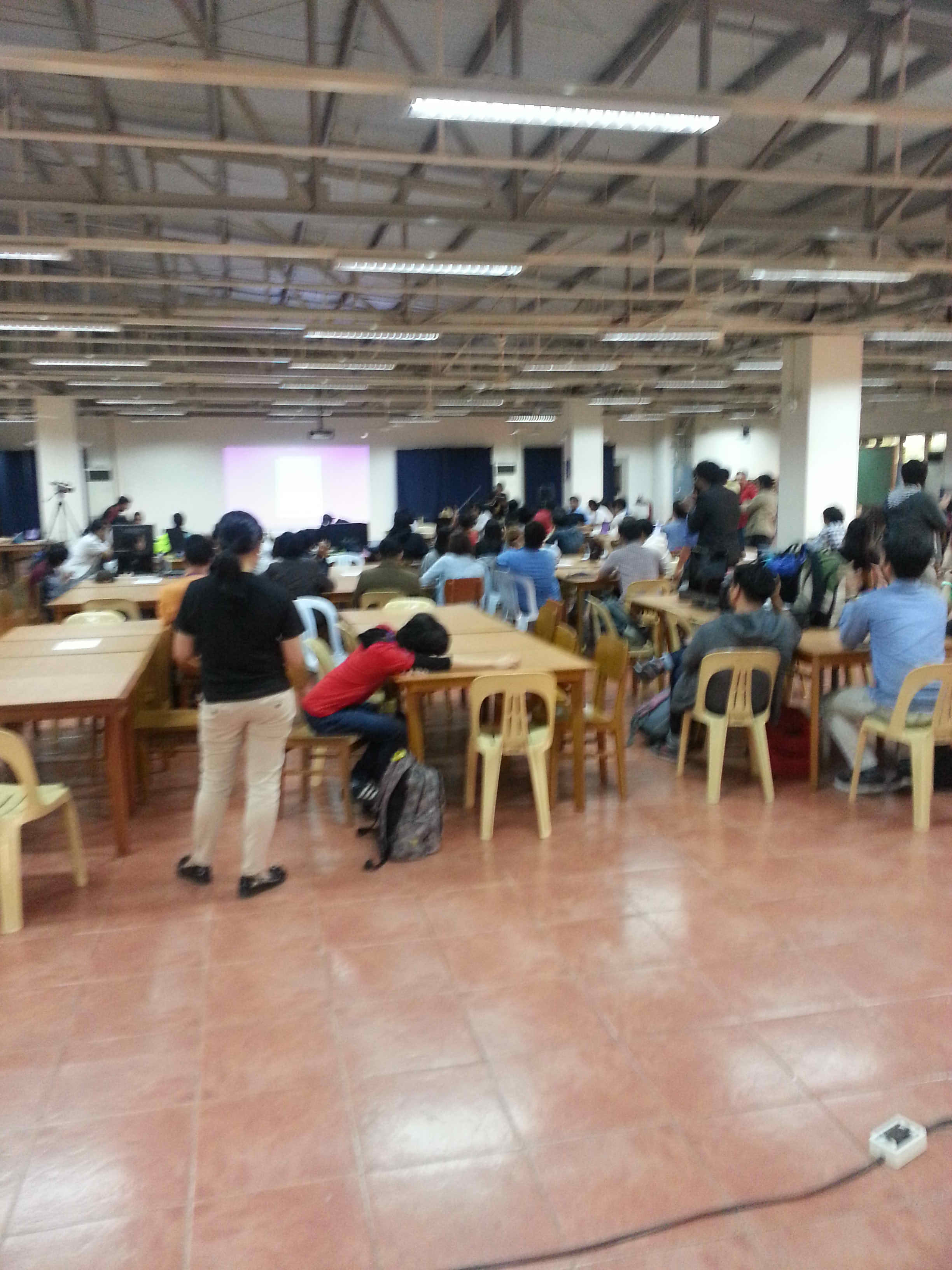 It’s not just about the games. It’s about the people making them.

Well… Yes and no. Yes, because it’s definitely playable. No, because the submitted game’s scope was, like, 10% of the original planned scope. We pretty much consider it 25% done at best. We didn’t get our project management in shape, and halfway through the jam, we were still making prototypes for 3 games, which was a bad idea in retrospect. We were having too much fun, I guess. 😛

1. Plan wisely! Take into account the size of your team and their skill levels when assigning tasks and planning how you’ll spend the 48 hours. A good trick on estimating task time is: take your best estimate — and double it. Think that a feature would take 2 hours to complete? Assume it takes 4.

2. Get some sleep! Chugging down energy drinks and coffee is not a good idea, and will most likely lead to bad code, bad decisions, and a bad time in general.

3. Have fun! Remember that this is a jam, not a competition. Learn new things, enjoy the venue, and talk to people and make friends! As that cheesy high school-themed song says, you’re all in this together, so better have fun with them while you’re at it!