Hi everyone! This is Luna, Creative Director at Altitude Games.

When you’re in the middle of a development cycle with deadlines breathing down your neck, it’s easy to forget about providing professional development for your developers. Our game designers brought this up with us a few months ago: they wanted to hone their skills on retention, monetization, and writing, but they had no time! What could we do as a company to encourage them to keep learning?

From their suggestions, our design training sessions were born. Each week, designers were given an assignment focusing on one aspect of game design. Then the following Monday, we’d huddle online on HipChat, go through each other’s assignments, and challenge presented ideas with questions (what we fondly called “firing at will”). Since the training was done online, anyone at Altitude could read along and/or participate, which resulted in some non-designers joining in.

We designed the assignments to be simple exercises – nothing too heavy that might delay their current work schedule, but enough to get them thinking and talking. They shared their work on Google Slides and collaborated with other colleagues when the task called for it. Here are a few examples of design assignments we worked on:

Use books, online reports, and other available information to spark discussion. Source: Forbes.com

We bought a copy of The F2P Toolbox by Rob Fahey and Nicholas Lovell, and it’s become a great source of discussion and review. For this first assignment, designers were asked to define what their game’s “superfan” was: who would spend a lot of time and money on their game? Using The F2P Toolbox and EEDAR’s “Deconstructing Mobile & Tablet Gaming” report, they made suggestions on how game whales could continue to spend money in their projects, and how they could convert new players into superfans.

This assignment forced the designers to look at their existing in-app purchase (IAP) pricing. We found a few instances where we’d mistakenly capped purchases, thus discouraging superfans from spending! Interestingly, everyone also wanted real-world merchandise for their games. (Robearto plushie, anyone?) 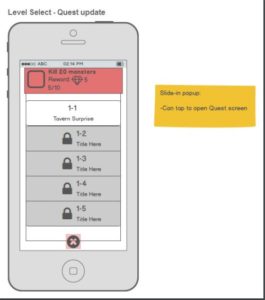 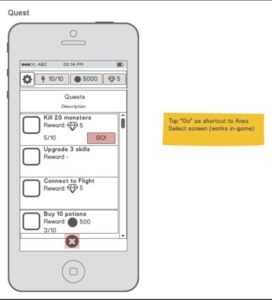 Don’t be afraid to use tools for your assignment – practice makes perfect!

Retention is the #1 problem free-to-play games have (if you don’t retain players, you can’t monetize them). We turned again to The F2P Toolbox to talk about how to get players to come back the next day. One way was to add a “to-do list” that had unfinished tasks, which itched at people’s tendency to complete them. (Isn’t it satisfying to check something off a list?) Designers were asked to identify different places in their game where they could have unfinished tasks, and then use the wireframing tool Balsamiq to create an interactive flow of that experience. We’d been using Balsamiq in our respective teams for a while now, but it was always good to get them to practice 😉

A daily quests list was the popular choice in the assignments, but the designers also suggested achievements, item collection, and daily login rewards as ways to encourage people to complete a list. 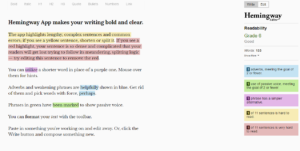 For non-writers, writing assignments are both daunting and highly rewarding

Due to the nature of our current projects, the designers don’t get to do much creative writing, so they requested writing training to sharpen their skills. Pokemon Go! had just come out, and instead of avoiding it (we all knew everyone was playing it, anyway), we took the opportunity to have the team write a 500-word review of the game. We gave them a simple outline: What is the game about? What’s your personal review? Include a personal anecdote, and what you think the game should keep or change. Plus a star rating over 5, of course.

They used the free app Hemingway Editor to check their writing for sentences that were hard to read or could be improved. With our design team scattered around Asia, English isn’t their first language — and this was a good way to brush up on basic grammar and writing skills. This assignment actually turned out to be a favorite; they asked for more game reviews in the future!

Altitude’s in-house data analysts present metrics of our games to the company every week, but it’s different when designers actually dive deep into their own game’s data. For this assignment, designers worked with our data team to identify churn points in their game. At which levels were users dropping off? They plotted these churn points in a graph, and then drew OVER the graph to create their ideal difficulty curve. At the end, they discussed what kind of friction they wanted in their game, and how both paying and free players could get past it.

The best part about this assignment was how the designers worked with the analysts, and the surprising results they found with their game. Choke points that they thought were hard levels didn’t turn out to be as hard, and vice-versa (people were churning at easy levels!). It forced the designers to rethink their level design and confront real data about their funnel. 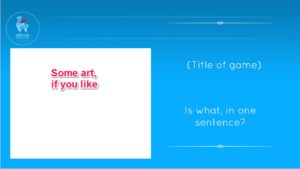 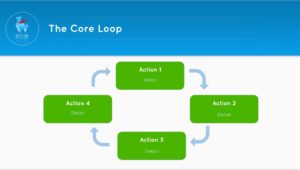 Pitching was by far the biggest and hardest assignment, distributed over several weeks. Anyone in Altitude was invited to pitch (with one artist and one data analyst joining in), and everyone attended the virtual pitching sessions, firing questions at will. To keep scope manageable, we required the pitches be for an incremental/idle game, and they should come up with art themselves (so no dependency on our artists).

First, they worked with our publishing team to do market research for their game and study the competition. After presenting their research, they had two weeks to work on their pitch, with a draft presented and discussed in between. The final pitch would cover everything they’d learned, including retention, monetization, ad support, etc. In the end, everyone got to vote on the pitch they liked the best (that wasn’t their own), and the executive team chose a “winning” pitch – which we hope to develop in the future 🙂

Pitching was a great way for the designers to relax and be creative. To keep the designers from being discouraged, we focused on the technical aspects of pitching (writing a pitch, doing research, arguing your points) rather than the actual feasibility of making the product. Pitching is an essential skill to have as a game designer — and after this assignment, some of them ended up pitching their ideas externally. Good thing we practiced!

These are just a few examples of our design assignments. Maybe they’ll help you improve your own skills as a game designer, or serve as starting points in your company’s training sessions. How do you do design training in your studio? Let us know!